Not much to say about me, my pets profiles are a far more interesting read than hearing me go on about myself! XP Most all of my named pets, have “RP Ready” profiles as of me writing this! (take a peek, the RP-ready ones have completed write-ups) But, here, have some random trivia about my user number (36), instead.

I go by Kaeldwyn on Flight Rising.
And also Kwei on FurVilla.

But ok, random trivia about me. I’mmmm… 30, Birthday is Feb 12th 1986 (The same year as two of my favorite movies), my taste in music is best defined as “Everything” and a bit “Eccentric”... But that second word kinda generically describes me pretty well in general. I like Anime, Manga, Movies, Music, Books, Comics, and am TOTALLY OBSESSED with the MMO “World of Warcraft”. (I also like Xbox games, and adore Guitar Hero… But can’t afford it.) Oh, yeah, and I’m a guy. XD Apparently something rare on petsites. *Puts up the “Protected Species” sign doragon made*

Now, then… *Waves my walking stick in the air* Gettoff mah lawn, ya rascally young whippersnappers!!!

Also, I do casually collect…

As a note, if some of my listed “Archetype Keywords” on my pet profiles are possibly confusing, it’s because I used them as examples of the character’s personality Archetype based on terms from an RPG system by White Wolf (which uses keywords for a character’s “Nature”, which describes their ‘real self’, and “Demeanor”, their ‘visible’/outward appearing self, I just condense the terms into a string of one-word outlines.). A good resource to puzzle them out if they don’t make sense is a website like this one or this one. But for the most they’re pretty self-explanatory in most cases. ^.^;; I just liked the idea of running them all together as a kind of ‘at a glance’ keyword descriptor of each character without having to read the whole thing.

Several coats, but I was getting sick of looking at the list and being depressed about it. So I’m not listing them anymore and I’ll hopefully stop dwelling on it.

~Ongoing~
{M} Powers of Life and Death: Pheonix and Frost - Thwei and Khalida 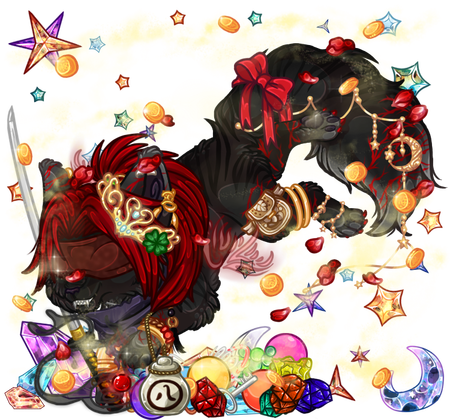